I Was Reincarnated as a Baby Fox God 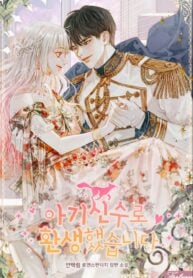 I Was Reincarnated as a Baby Fox God

The princess of the Roachim Empire was killed by her older brother. Killed, accused of killing their father, the Emperor, she… Kyuaang? …was reincarnated as a divine beast?! An unexpected second life. But something seems weird? The ruler of the north of the Roachim Empire. The owner of the Idelbadour Mountains and the Ice Wall. The Grand Duke of Elharan, whom the Emperor himself cannot approach recklessly… ‘My dad, so you mean I’m a divine beast?!’ *** “My lady…!” “Please accept these tributes and send down your blessings!” The villagers knelt together at once and prayed earnestly. While wiggling and not knowing what to do, I heard the sound of laughter in my ear. -Lusha got stronger! -She’s strong! She’s fresh! She’s thrilling! -Look at that, even the humans surrendered in the face of Lusha! The spirits were terribly proud of her, saying that the humans were afraid because of Lusha’s power. And they lifted her in the air and carried her. Encompassing her was also a dazzling light that appeared out of nowhere. Everyone who was praying opened their eyes wide. “It’s the blessing of the Divine Beast!” “Hooray for the Baby Fox!” Lusha sighed. “Kiiyuu…”

Can I Cancel The Confession?

Shadow Paradox: The Incapable to Possess You