I’ve Been Here From the Beginning 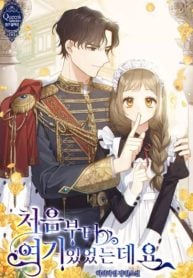 I’ve Been Here From the Beginning

Don’t do that too much. Poor maid

The day after I commented on the pity of the extra maid, who even the author had forgotten.
He has possessed that poor maid, Maria Mayer.

Due to the convergence of its presence to 0, it even acquired the title of ghost.
Still, I thought that I
could do my job with sincerity, but people who were interested in her began to appear.

Even the future princes and grand dukes!

“Can’t you feel the presence? What the hell is your identity?”

With the Crown Prince Elias who was half interested and half wary about Maria’s identity, he wanted to keep him by my side.

“It doesn’t matter that I don’t remember. In the future, you can make sure you don’t forget me.”

Archduke Dietrich approached with a smile as if he knew it even though it was the first time he had seen it.