My Teacher Has Chosen My Husband Candidates 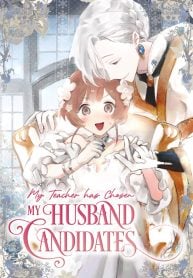 My Teacher Has Chosen My Husband Candidates

Lena has been counting the days until she comes of age. This is all to finally confess her feelings to Nix, her teacher, so that he can become her husband instead of her guardian. But on her long-awaited birthday, Nix suddenly vanishes without a trace, and five years pass in the blink of an eye. Lena dutifully tends to Nix’s store while waiting for his return. Then one day, out of the blue, she receives an absurd letter from Nix that says he’ll be sending prospective husbands her way that he has carefully sought out and selected during his absence. All Lena wants is for Nix to come home, but surely it couldn’t hurt to play around with these candidates in the meantime, right?
Show more

My Wife Who I Admired

The Villain Discovered My Identity