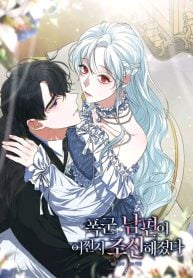 Eurenia, the eldest daughter of Count Vincent, famously lost her eyesight and voice when she saved the madam of the Euclid dukal family from a fire. The truth, however, is that while she did save the duchess, her loss of sight and inability to speak are due to a drug she was forced to take in order to blackmail the Euclids into marrying her to their oldest son Cassius, the future Duke of Euclid. Treated as a pawn and puppet by her family, she was used and then discarded only to die from the sideeffects of the drug.

She thought that was the end, but no: When she opened her eyes again, she had returned to 4 months ago, before she had betrayed her husband by order of her family. This is her chance to divorce Cassius, who was forced to marry her, then find a cure for the sideeffects of the drug that has robbed her of her sight and voice but…
“Is the reason you’ve been avoiding me all this time just because you’re afraid of being discovered?”
His purple pupils almost pierced her body.
“It isn’t because you hate me?”
Suddenly his eyes turned red.
“Can I come near you now?”
Then his ears also turned red…